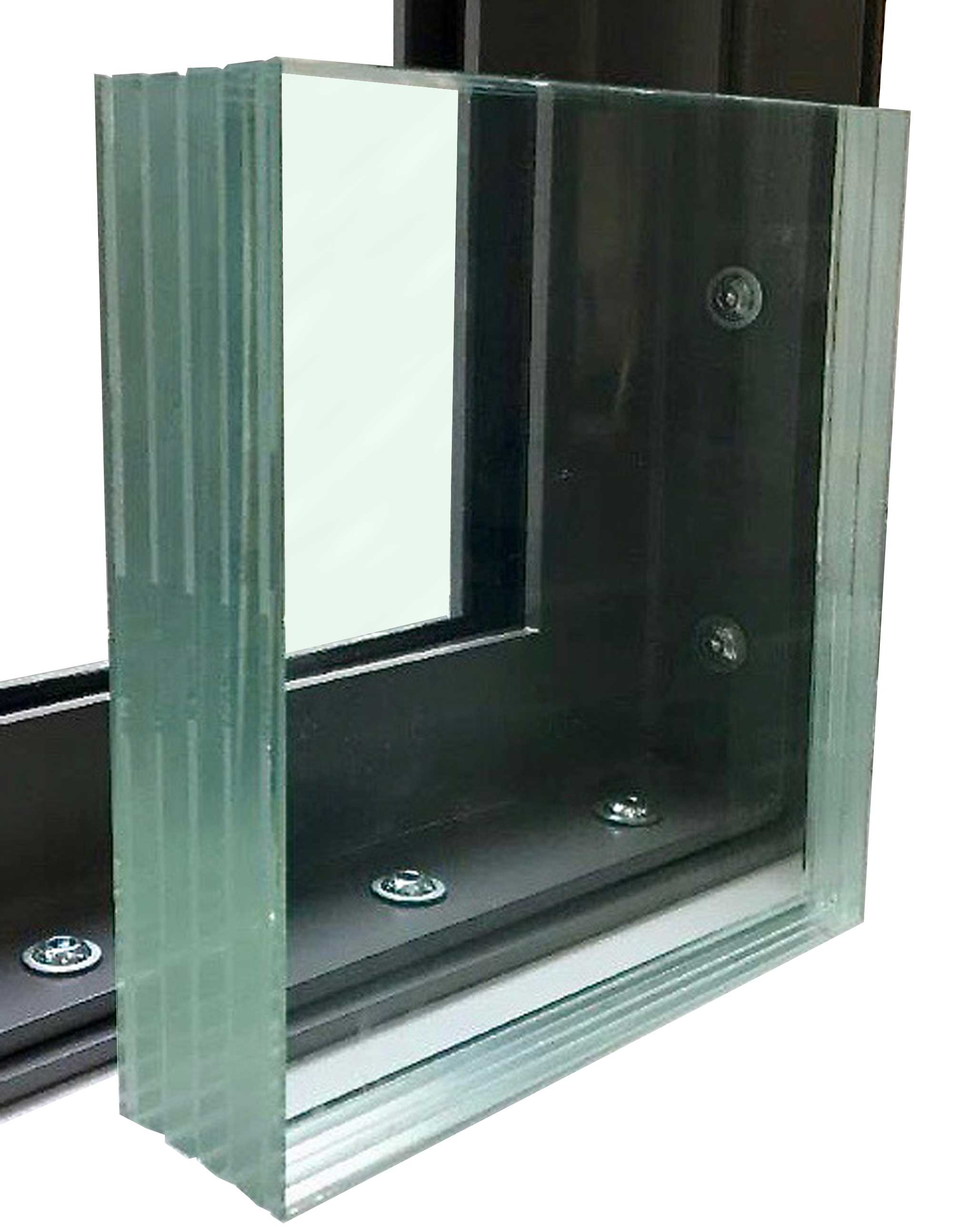 Architectural Armour have experience providing solutions for blast resistant windows using standard or enhanced multi-laminates.  Typically our blast glass is also bullet resistant so the product can withstand the fragmentation as well as the blast pressure.

Our clients request blast windows and doors in a variety of performance levels, C15, C20 & C30 ,  EXV for vehicle bombs, SB for satchel bombs, PSI and more.  Peak blast pressure and overpressure are technically measured in several units, common units are kPa (Kilopascals) PSI (Pounds per Square Inch).  Alternatively we may see kPa-msec.  This is telling us the pressure and for how long it will ‘push’ against the window.  This is referred to as an ‘Impulse’ load.  Please see blast technical specifications for testing methods.

As the framing of blast glass is critical to its overall performance  customers typically purchase windows, which you can see more on here Blast Resistant Windows

For more information on our options and to discuss you requirements further please contact us via email or telephone; mailto:info@architecturalarmour.com  or +44(0) 1981 257000.

The purpose of blast-resistant glazing is to reduce the risk of injury to building occupants.  The performance of the blast-resistant glazing has to be validated by testing evidence.  The first design step is to define the explosive loading.  This is best specified as blast pressure and impulse, which can be derived from a charge weight and standoff.  This is often described as the threat.

In designing blast-resistant glazing, it is usually accepted that some degree of damage to the glass is almost inevitable.  The second design step is to agree the acceptable risk within the building.  This is normally specified as the acceptable hazard level. Glazing refers to both windows and glazed facade systems.  It is important to consider the window or facade as a system.  This includes the glass, the gasket or sealant, the frame, the fixing of the frame, and the support system.

The blast pressure is applied to the whole area of the window or facade and the behaviour of the glass is dependent on the pane size. The loads on the support system and its performance are also dependent on the size of the glass pane(s).  If glass is tested in a rigid frame, the stresses in the glass are maximised as are the loads in the frame’s fixings.  However, if the glass is mounted in a frame with gaskets or sealants, the system’s flexibility tends to reduce the stresses in the glass and the fixings. 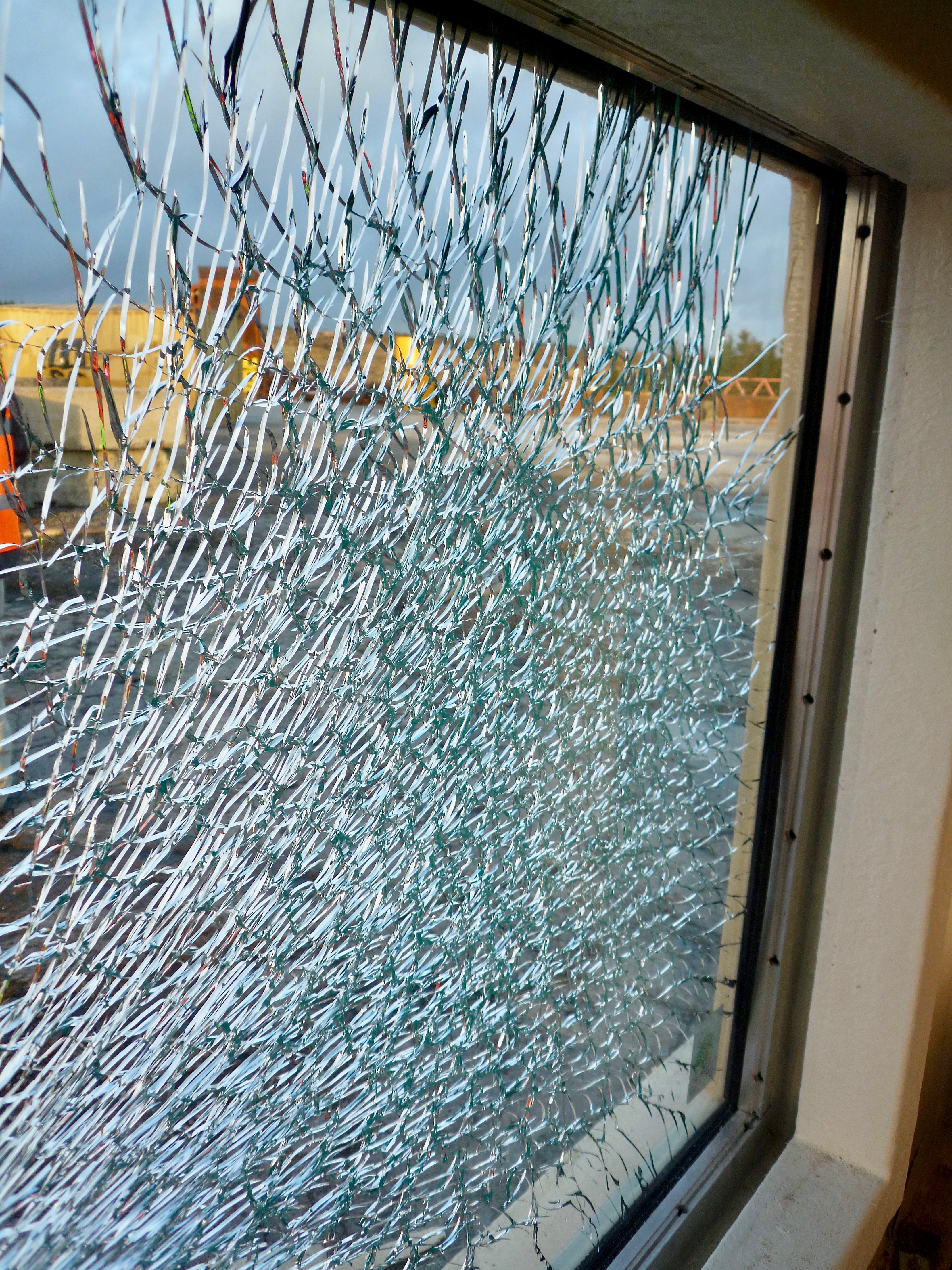 As mentioned above, in explosion testing, it is accepted that some degree of damage to the glass is almost inevitable.  The purpose of blast-resistant glazing is to reduce the risk of injury to the building’s occupants.  Blast leakage, minor damage and glass fragments are allowed as long as they do not exceed specified criteria.  As standards have been developed, these criteria have become better defined.

EN 13541:2012 does not allow any holes (breakthrough from the attack to the protective face) in the glass or between the glass and the frame.  It permits an additional designation of splinters (S) or no splinters (NS) to be awarded.  Splintering is defined as cracking of the rear (protective) face or small fragments (glass dust) being launched from the rear face.

GSA-TS01:2003 adopted the United Kingdom (UK) hazard-rating levels with minor modifications.  This rating system is based on the projection of the glazing debris into a 3 metre (m) deep cubicle.

In ISO 16933:2007 and ISO 16934:2007 more sophisticated hazard criteria were adopted.  Finally, these standards allow a classification into hazard levels with regard to the observed damage.  The UK hazard-rating levels were adapted to include better definitions of allowable fragments and permitted pull-out of the glass from the frame.

Architectural Armour were commissioned to provide ballistic resistant products for a new armoury at a UK International Airport. 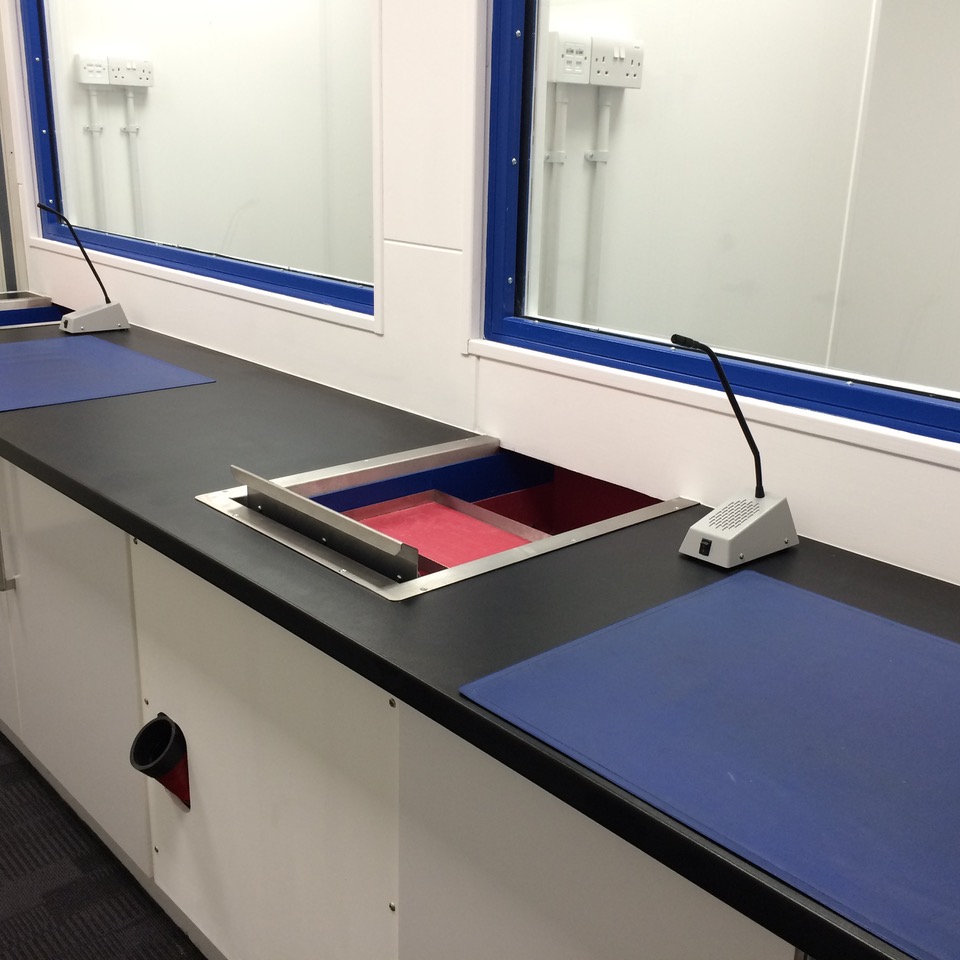 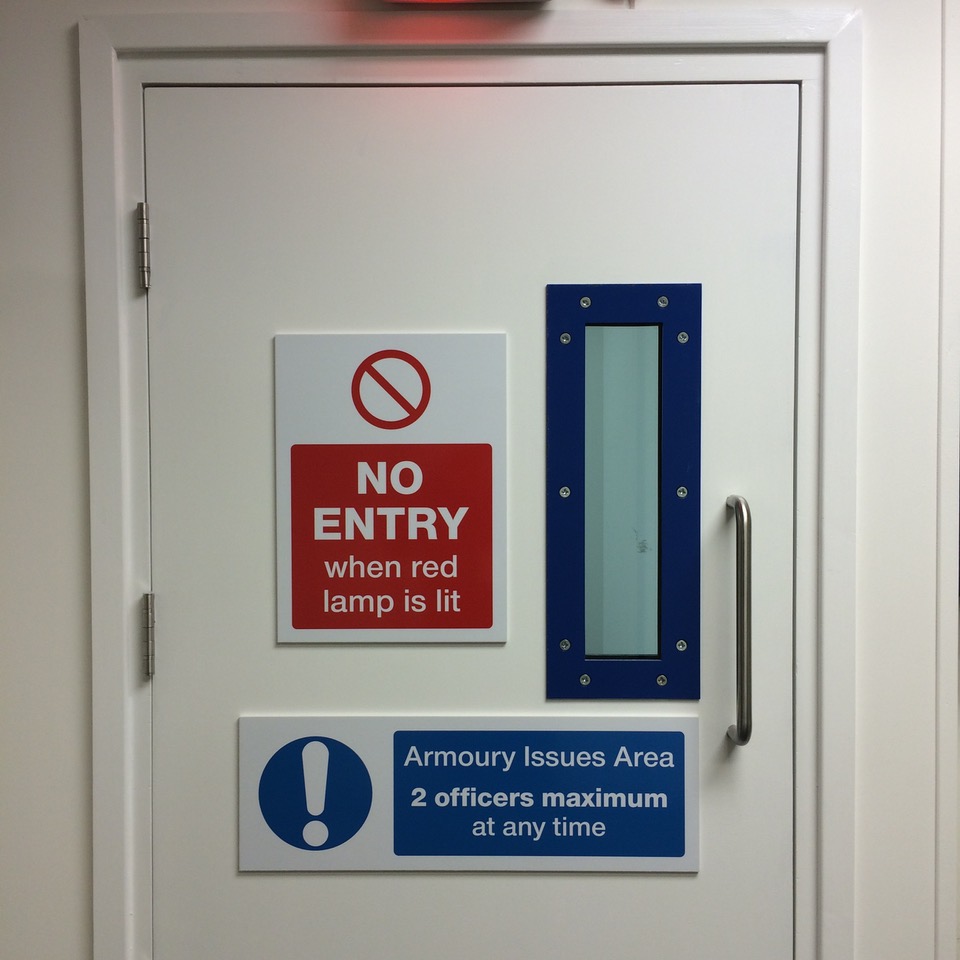 We read it all the time in the news headlines, multiple attackers arrive on stolen mopeds, dressed in black with helmets covering their faces smashing their way through glass shopfronts and glazed screens. 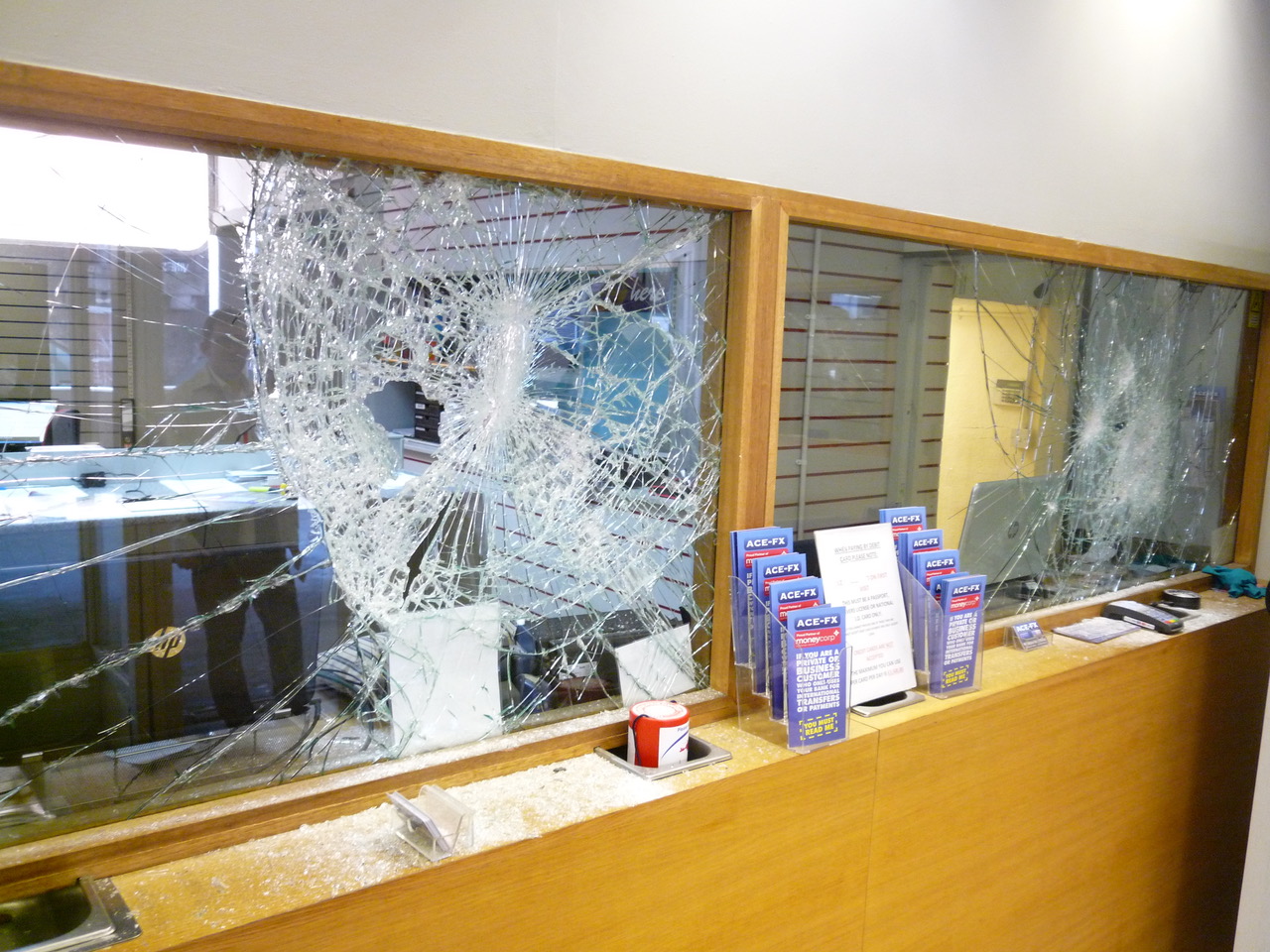 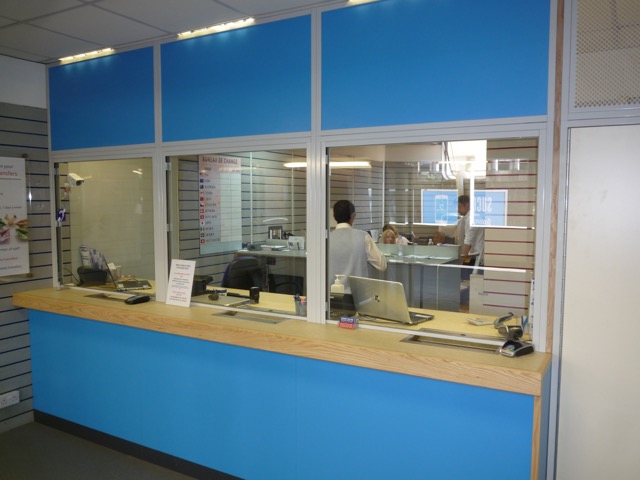